Treatment of Brain and Skull Base Tumors in Orange County 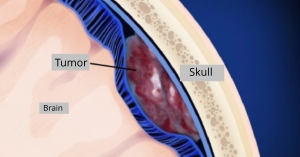 Removal of brain and skull base tumors that arise in the base of the skull, where the head and neck meet and where major nerves, blood vessels and glands reside, requires highly specialized skills to provide the optimal treatment and care to patients. Robert Louis, MD has the experience, education, training and expertise in minimally invasive keyhole brain surgery to treat brain and skull base tumors.

[accordian class=”” id=””]
[toggle title=”Chordoma” open=”yes”]Clival chordomas tumors are locally invasive tumors that arise in the base of the skull. Clival chordomas are best treated with maximal surgical removal followed by focused radiotherapy. Fortunately, the majority of chordomas can be removed via the nose using an endonasal endoscopic approach. We have the world’s best chordoma tumor surgeons with the largest endonasal experiences treating clival chordomas. By incorporating cutting edge technology and instrumentation with proven surgical experience, we make chordoma surgery safer, less invasive and more effective. Read more »[/toggle]
[toggle title=”Colloid Cyst” open=”no”]Colloid Cysts are benign cystic fluid collections that occur within the fluid-filled regions of the brain called ventricles. Colloid cysts commonly occur at the outflow of the lateral ventricles and can cause obstruction of cerebrospinal fluid (CSF) flow. These can present with headaches, visual changes, memory difficulties and can occasionally result in loss of consciousness or coma. The definitive treatment of these cysts is surgical resection. Depending on their exact location, colloid cyst surgery can be performed with minimally invasive endoscopic or microscopic avenues through a quarter-sized bony opening. By incorporating cutting edge technology and instrumentation with proven surgical experience, we make surgery safer, less invasive and more effective. Read more »[/toggle]
[toggle title=”Epidermoid Cyst” open=”no”]These relatively uncommon benign cysts or tumors arise from stratified squamous epithelium over the surface of the brain. The most common locations are around the brainstem, Pituitary Gland and in the posterior fossa along the cerebellum and brainstem. Read more »[/toggle]
[toggle title=”Glioma – Astrocytoma, Ependymoma, Oligodendroglioma” open=”no”]Gliomas are the most common type of primary brain tumor. They can occur at any age and in any part of the brain or spinal cord where glial cells (the support cells of the nervous system) are located. There are 3 major types of gliomas: astrocytomas, ependymomas and oligodendrogliomas. Astrocytomas are defined by their histological grade from low grade to high grade. The most common type of glioma is the high grade glioblastoma multiforme which is rapidly growing and generally carries a poor prognosis. Lower grade astrocytomas (grades 1 and 2 and pilocytic astrocytomas) are generally slow growing and carry a better prognosis. Read more »[/toggle]
[toggle title=”Hemangioblastoma” open=”no”]Hemangioblastomas are benign brain tumors that most often arise in the cerebellum or brainstem. They typically have a solid and a cystic component. Hemangioblastomas may also occur in patients with Von Hippel-Lindau disease, an inherited autosomal dominant condition in which both benign and malignant tumors develop including retinal angiomas, pancreatic cysts, pheochromocytoma and renal cell carcinoma. Read more »[/toggle]
[toggle title=”Meningioma” open=”no”]Meningiomas are the most common benign brain tumor although up to 10% can exhibit more aggressive growth patterns. Meningiomas are classified by the World Health Organization into 3 grades based on their growth pattern and histology: Grade I (typical – 90%), Grade II (atypical – 6-9%) and Grade III (anaplastic 1-3%). These tumors arise from arachnoidal cap cells in the brain coverings (meninges). They are more common in women than men and can occur in all ages but are typically seen in middle-aged and older adults. Read more »[/toggle]
[toggle title=”Metastatic Brain Tumors” open=”no”]Metastatic brain tumors (also known as secondary brain tumors) arise from a cancer from another part of the body and occur in 10 – 30% of cancer patients. These are the most common type of brain tumor occurring 5 – 10 times more commonly than Primary Brain Tumors. Read more »[/toggle]
[toggle title=”Olfactory Neuroblastoma (Esthesioneuroblastoma)” open=”no”]Olfactory neuroblastomas (ONs) are rare malignant tumors that arise from the olfactory (smelling) nerve and extend into the nasal cavity. They are locally invasive tumors that grow into the ethmoid and other air sinuses and can extend onto the orbits as well as the brain. In cases with intracranial extension, the tumor typically grows through the anterior skull base dura in the area of the cribiform plate and into the brain cavity elevating or infiltrating the frontal lobes. They occur equally in adult men and women and are uncommon in adolescents. Read more »[/toggle]
[toggle title=”Schwannoma” open=”no”]Schwannomas are benign tumors that arise from the nerve sheath (covering) of cranial nerves along-side the cerebellum and brainstem. Read more »[/toggle]
[toggle title=”Sinunasal Carcinoma” open=”no”]Sinunasal carcinomas arise from the nasal sinuses and skull base region. Read more »[/toggle]
[/accordian]

Dr. Robert Louis specializes in minimally invasive brain surgery for the treatment of brain and skull base tumors. For appointments, please call (949) 383-4185 or Contact Us.

SCHEDULE YOUR VISIT!
[contact-form-7 id="2655" title="request consultation"]
Read what our patients have to say about us!