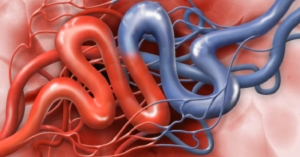 Glossopharyngeal neuralgia is condition caused most frequently by an abnormal looping artery impinging against the Glossopharyngeal nerve, the root entry zone into the brain stem. This cranial nerve condition is similar to trigeminal neuralgia but is much less common. The shooting pain occurs in the throat, tonsil region, and base of the tongue on one side. The pain may be spontaneous and is often triggered by swallowing.

Some possible causes glossopharyngeal neuralgia re:

Symptoms of glossopharyngeal neuralgia include severe pain in areas connected to the ninth cranial nerve:

The best diagnostic test for glossopharyngeal neuralgia is the topical application of cocaine or viscous xylocaine to the throat and tonsilar fossa on the affected side, which should provide temporary pain relief and can be used to allow the patient to eat as well as to confirm the diagnosis.

Initial treatment of glossopharyngeal neuralgia is medications. However, medications are not as effective for glossopharyngeal neuralgia as they are for trigeminal neuralgia. As a result, most of the patients require microvascular decompression (MVD) which is the only advisable surgical procedure. Minimally invasive keyhole approach for microvascular decompression (MVD) will allow your Orange County neurosurgeon Robert Louis, MD to move or separate the blood vessel and hold it away from the irritated glossopharyngeal nerve and the upper two branches of the vagus nerve. MVD is performed using endoscopic retromastoid approach to create a small quarter-sized bony opening behind the ear.

Ablation Therapy
Ablation therapy is designed to ablate or selectively destroy specific fibres of the glossopharyngeal nerve and spare healthy tissue and lower risk and discomfort for patients. This therapy consists of various approaches of cutting or sectioning the nerve. Ablation therapy is recommended as a last resort.

Dr. Robert Louis specializes in minimally invasive brain surgery for the treatment of chordoma. For appointments, please call (949) 383-4185 or Contact Us.