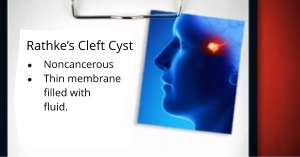 Rathke’s cleft cyst can develop when the Rathke’s pouch does not close completely. The exterior of the cyst is a thin clear membrane while the interior is filled with fluid.

Blood tests- Blood tests can help determine what effects the cyst is having on the pituitary gland.
Magnetic resonance imaging (MRI)or computerized tomography (CT) scan- For more detailed pictures of the brain.
Vision test- This test will help determine if growth of a pituitary tumor has affected or impaired your sight or peripheral vision.

Rathke’s cleft cyst treatment typically require surgical drainage and/or removal. The goal of surgery is to completely remove or drain the cyst contents while preserving pituitary function and alleviating symptoms. Removing the cyst lining is often avoided to minimize damage to pituitary gland. Complete removal of Rathke’s cleft cyst is possible in 80-95 percent of cases, with a recuring rate of 5–15 percent over 5-10 years.

Dr. Robert Louis specializes in minimally invasive endoscopic transsphenoidal surgery for the drainage or removal of Rathke’s cleft cyst. For appointments, please call (949) 383-4185 or Contact Us.